See the Winners of the 2022 Earth.Org Photography Competition!

Earth.Org has been proud to host our Global Wildlife & Natural World Photography Competition, and a sincere thank you to all those who entered the 2022 edition. We received entries from more than 500 talented photographers, conservationists, wildlife enthusiasts and explorers from across the world who all share a passion for the environment and uncovering our planet’s natural beauty. Here are the winners and runner-ups of this year’s competition, showcasing the stunning and powerful scenes depicting the human impacts on the environment and wildlife, as well as efforts people are doing to lead the change. 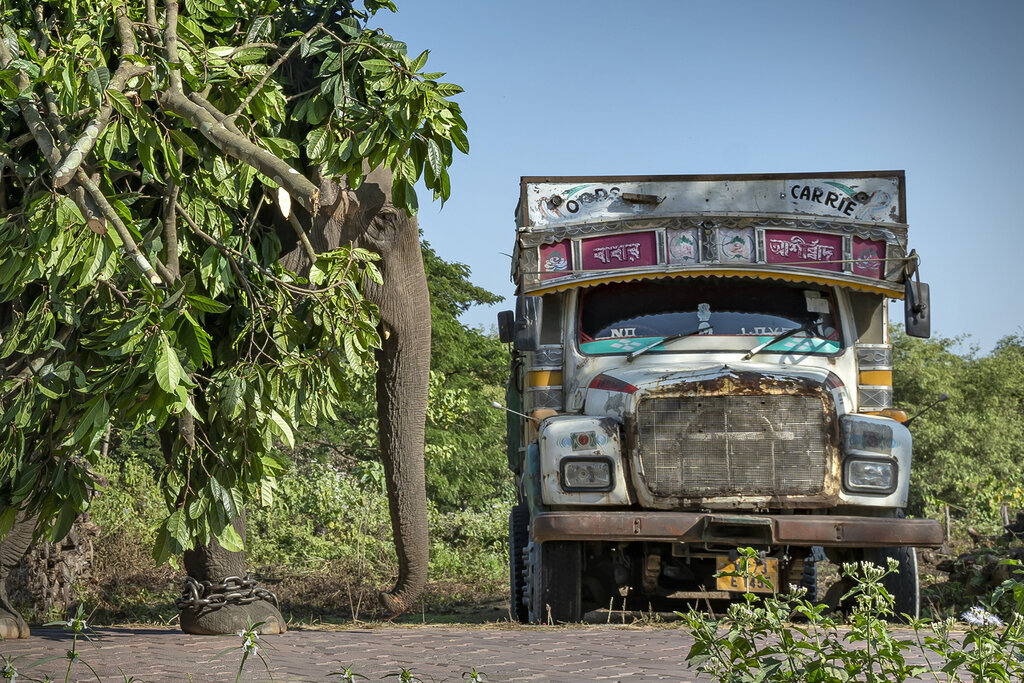 Freelance photographer Sujan Sarka captured this stunning scene of a kumki, meaning trained captive elephant, being rescued by the forest department of West Bengal after being  detached from its group. Following training, a kumki is said to be paid a regular salary every month. Perfectly framed by the lush trees yet its chain keenly visible on its ankle, this particular moment was taken when this kumki elephant was carrying his food from the forest to his shelter.

Faith Awuor is a photographer and model, and a member of the conceptual photography house, Spartan Photography Kenya, which uses photography and videography to tell and create stories that affect human beings and wildlife as a whole. This image is part of the “Last Breath” series that portray human activities of mining, deforestation and air pollution impacting the young generation, who are our future. The powerful work aims to put caution that if nothing is done now, our future will be so dusty that it will not be seen.

“In Sri Lanka, there is a garbage dump near the forest in Oluvil.

It was a tragedy to hear in the morning (January 5,2022) that an elephant was on the verge of death in the garbage dump. I called immediately to wildlife officials after that I rushed to the scene to inquire with those in charge of the landfill, who also said they had also informed the wildlife officials. As soon as I went, I saw the elephant curling its body in pain like a little child throbbing with pain and agony, so much so it could not even stand up and lost strength in its body. It looked at me with tears in eyes when I went near and took the photo.

Wildlife officials who visited the affected elephant with a doctor examined it and reported that it had a sudden blockage in the oesophagus due to daily ingestion of polythene waste, which was wrapped around the food items when it was consumed.

At the moment of submitting the photo, although the elephant had been undergoing treatment for the past three days at the time, she passed away the morning of January 8. Elephants have become addicted to the many types of food found in the rubbish dumped there, and completely changed their way of life. When elephants smell food, it doesn’t matter if it’s wrapped in paper or covered in polythene, they swallow everything.  These wastes then get trapped in the elephant’s stomach and cause a very painful death.  Not only elephants but also dogs, cats and a variety of birds are attracted to the junk food found in the garbage dump and are coming to shorten their lives.”

Lorenzo Mittiga, Italy Our “Climate Action” category winner Lorenzo Mittiga also submitted a jarring image depicting Elly Albers of “Bonaire Wild Bird Rehab” checking vital signs of a young dying flamingo. Flamingos are often collected off  the roads of Bonaire – a Caribbean island east of Central America and north of Venezuela – by tourists and brought to the centre. But nobody knows the cause of the immobility or the injury of the birds. Elly always tries her best to cure them according to her veterinary skills and procedures to save their lives, but sometimes, there are no chances for the birds to survive certain conditions.

The pollero hawk is an endangered bird species on the brink of extinction in the country of El Salvador. Captured by Wilfredo Diaz, photojournalist and a teacher at the University of El Salvador, the hawk is shown under the shadow of the moon at dawn, standing still on that pine tree to see what prey he hunts.

The picture was taken emerging freelance photographer Md. Mudassir Hossain, who has a genuine passion and empathy for humanitarian, documentary, and everyday life photography. He capture this scene at a brick kiln in northwest Bangladesh with intention of revealing the impact of brick kilns on nature, as well as reaction of nature to humans.

Brick production is an important industry in Bangladesh. Approximately 1 million people directly or indirectly work at around 7000 brick kilns. Every year, the number of brick kilns is increasing every year due to the rising demands for infrastructure developments. Brick kilns are largely responsible for polluting the major cities and even rural areas. Air quality becomes severally unhealthy especially during the dry season when the brick kilns are active.

Brick kilns not only emit carbon dioxide, but also other harmful gases. Those who work at brick factories, their healths are at high risk. Dhaka, the capital city of Bangladesh is one of the most polluted cities on the planet, and brick kilns are one of the main reasons for such worst air quality. If it continues like this, air quality would be unliveable in all other major cities around the country. In addition to that, Bangladesh is one of the most vulnerable countries to climate change and brick kilns are driving global warming.

Mohammad Rafayat Haque Khan, Bangladesh Mohammad Rafayat Haque Khan is a documentary and reportage photographer who hails from Sylhet, Bangladesh. In this heartbreaking image is a mother who works at a dump yard from morning till sunsets to provide for her family. Reckless consumption and poor management has caused plastic and other waste to pile up at landfills, where wildlife also feeds from, threatening their health and survival. Human activities continue to have negative impacts on the environment and create many ecological problems, from air, water, and land pollution, to unreasonable agricultural systems, to deforestation. As a result, the number of available natural resources is decreasing.

Yoong Wah Alex Wong, Turkey Asst Prof Dr Alex Wong at the Sabanci University, Istanbul uses climate, weather, and its ever-changing phenomena as his artistic subject of investigation and discovery. This includes ideas of inclusion and exclusion, identity within one’s community, and the borderlands’ relationship are hard to define, and the possibility of borderless borders.

“The countless red roofs continue to flourish in Sertar, Sichuan, China’s Tibetan Buddhist area and provide shelters for Tibetan Buddhists who wish to devote themselves to religious studies. The captured image reflects the Buddhist sanctuary’s ongoing construction, with the dense and crowded red roof creating an alluring rhythmic pattern. Paradoxically, are these self-built red settlements abide by standardised structure and housing safety regulations? Who should take the responsibility if an unimagined landslide happens? The importance of daily life is as essential as daily devotions. The religious facilities provided an identity, history and rooted cultural background to the region. The government’s instructions and efforts to supply safe and regulated buildings are essential to the community’s safety.”

Depicting a coral restoration project on Bonaire. Scientific divers harvesting the coral fragments from the trees in the coral nursery. After six months of nursing, the fragments are grown enough to be collected and out-planted in the designated areas for restoration.

The impacts of river dredging on the aquatic ecosystem and the life it supports have been relatively well-studied in Bangladesh. Dredging activities potentially affect not only the site itself, but also surrounding areas, through a large number of impact factors, such as turbidity, sedimentation, resuspension and release of contaminants. Effects can be immediate or develop over a longer time frame and they may be temporary or permanent.

In Ian Cheibub’s work, he tries to understand what are the mechanisms that the people from the Global South develop to survive and how they empower their own narratives through cultural, political and social tools. The Horta de Manguinhos project (Manguinhos vegetable garden), an urban agriculture initiative and Latin America’s largest community farm, is helping at least 800 families, as well as employing more than 20 local workers at a time when Brazil grapples with a pandemic-battered economy. It is located at Manguinhos’ favela, in the north zone of Rio de Janeiro, Brazil. More than 15% of teenagers have children and in some areas, unemployment is more than 50%, making Manguinhos’s Human Development Index as little as 0.65%, among the five lowest in Rio de Janeiro. The Garden plays an important role in changing this community’s life and the environmental landscape.

Our competition for 2023 has already kicked off! Make sure to follow us on social media for updates. If you would like to become a part of our global movement and mission, consider becoming an EO photographer. Earth.Org’s official photographers and their content will be regularly featured in our articles and our Instagram and Facebook posts. There is no financial commitment. When we post one of your photographs, we will inform you and ask you to repost the article or post on your Instagram story.