For many years, California topped the US rankings as the state with the worst air quality. We explore the causes behind it and to what extent the state and federal laws and regulations passed in recent decades have contributed to tackling the issue of air pollution in California.

Every year for more than two decades, the American Lung Association has conducted extensive research on the air quality across the US to compile the State of the Air report. The latest edition, published in 2022, revealed that more than four in 10 Americans – equivalent to over 137 million people – live in places with unhealthy levels of particle pollution or ozone. This number has grown by almost 12 million in just six years, a clear indicator that the situation is rapidly worsening. Moreover, the report found that in 2021, several areas across the country were impacted by daily spikes in deadly particle pollution, and had the highest number of days with ‘very unhealthy’ and ‘hazardous’ air quality ever recorded. 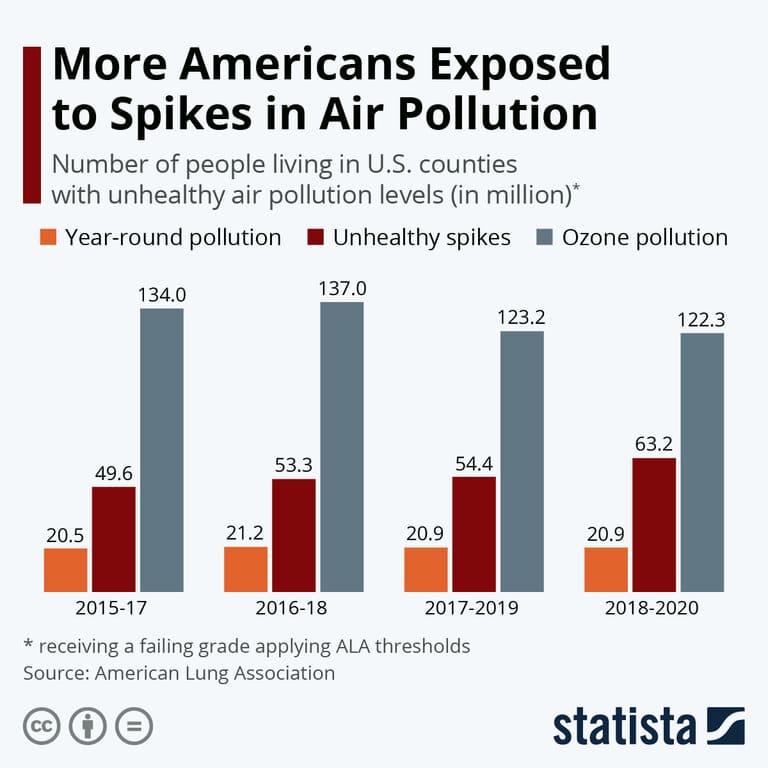 According to the study, California leads the rankings for urban areas with the worst air quality. Among the 25 worst cities for both daily and year-round particle pollution, numbers 9 are Californian cities respectively. The worst-performing are Bakersfield – located in the Kern County – and the Fresno-Madera-Hanford metropolitan area. Los Angeles was ranked top out of 226 metropolitan areas for high ozone days.

Unsurprisingly, air pollution in California results in thousands of fatalities each year. A 2021 study conducted by the Environmental Defence Fund and George Washington University estimates that exposure to particle pollution led to more than 3,000 deaths and nearly 5,500 new childhood asthma cases across the California Bay Area, while exposure to nitrogen dioxide generated from vehicles killed more than 2,500 people. Overall, however, air pollution is responsible for a much higher number of deaths, which in the state averages 10,000 every year.

From vehicular emissions and fossil fuel production to prolonged wildfire seasons due to climate change, there are many sources of pollution that contribute to such an unhealthy air quality in California.

Arguably one of the biggest sources of harmful emissions in California is the transportation industry, which currently accounts for approximately 40% of the state’s atmospheric pollution. The state, particularly Los Angeles, and its surrounding areas have a high concentration of vehicles; more than one every two people own a car, which explains the severe and declining air quality. LA is notorious for its urban traffic congestion and, not surprisingly, the leading city on the most ozone-polluted list as well.

However, the state recently adopted some of the nation’s strictest regulations for vehicles, which contributed to a drastic decrease in emissions in recent years and paved the way for other states to follow. To target personal vehicular emissions, many California cities are now increasing public transportation infrastructure. The government is also encouraging residents to transition to electric vehicles (EVs) by offering tax breaks and other financial incentives while expanding its network of charging stations. And, as numbers show, these efforts are paying off. In 2021 alone, EVs represented 12.4% of all vehicle sales, placing the state as the undisputable US market leader. Furthermore, California has almost 35,000 charging stations, by far the highest number across the country. Under a new proposal from the state’s clean air regulator, zero-emissions cars would make up to 35% of new passenger vehicle sales by 2026, 58% by 2030, and 100% by 2035, when a complete ban on gas-fuelled vehicles is set to come into force.

California is also home to one of the busiest and largest container ports in the Western Hemisphere – the Port of Los Angeles – as well as 12 airports with major cargo operations. But while these commercial activities account for nearly a third of the state’s economy, they are also responsible for half of its air pollution. In 2020 California adopted new, stricter emission standards for diesel trucks, oil tankers, and other ships in a bid to tackle the rising smog. These new rules – some of the most stringent in the last decade – are expected to eliminate some 10,000 tons of emissions per year.

The hot and dry climate makes California extremely prone to wildfires. With climate change aggravating and sparking a rise in temperatures as well as in drought conditions, these events have gotten more frequent, intense, and destructive in the past two decades.

Despite being just a temporary source of emissions, their impact on monthly and yearly air pollution is still quite severe. Indeed, some of the highest levels of pollution in the atmosphere are recorded in areas mostly affected by wildfires. This was proved in 2019 when 19 out of the 20 most polluted cities in the United States were located in California, the state by far mostly affected by severe fires that season. And again in 2020 – a record-setting year for wildfires in the Pacific West – the state experienced extremely unhealthy air quality levels, with major cities like Los Angeles and San Francisco recording numerous days with exceptionally high levels of air pollution.

In the most recent State of the Air report, the Golden State holds all top four cities in the country for worst ozone, and experts agree that extreme heat is the main contributor. Ozone generates when warm temperatures and abundant sunshine – for which the Californian coast is known – bake nitrogen oxides and volatile organic compounds. For this reason, ozone levels are usually higher in summer.

Despite other countries in the US also being affected by heatwaves each year, California’s geology is what makes it particularly vulnerable to these weather events. Some of the state’s most populous cities – such as Los Angeles, San Diego, and San Francisco – are located near mountain ranges, which trap the air moved easterly from sea breezes, facilitating the accumulation of pollution in the coastal valleys.

Another interesting finding from the report is that the impact of pollution from extreme heat is not shared equally. As a 2021 study published in the Proceedings of the National Academy of Sciences found, the combination of bad heat and bad air can cause particularly dangerous conditions for vulnerable communities across California, increasing physical and mental stress among poor, under-resourced, and often non-white zip codes. The main explanation for this trend is that poorer people tend to live on the outskirts of cities, where the confluence of emissions from nearby industrial activities and major roadways mean significantly higher air pollution and thus greater health risks. The study also highlighted the fact that California’s environmental regulations have systematically protected the state’s white residents over people of colour.

Unsurprisingly, the level of air pollution depends to a great extent on the energy sources used to generate a state’s electricity and run its infrastructure and economy. In May 2022, California reached a milestone by generating enough renewable power to meet 103% of consumer demand in just a day, a sign of the state’s remarkable progress in terms of clean energy. In 2018, Governor Jerry Brown issued an Executive Order to achieve carbon neutrality by 2045 and maintain net negative emissions thereafter. To do this, California is increasing investments in renewable energy, particularly solar. Given its vast land and abundance of sunshine, this is clearly a key resource that will help the state reach its target. Other forms of renewable power, including wind, geothermal, biomass, and hydroelectric are being utilised as well. However, some problems persist.

Hydropower, for example, is highly affected by the persistent droughts that are drying up water resources in the country. These events, experts predict, could cut energy generation in half this coming summer, which would result in an increase in natural gas-fired power and higher electricity prices. And while solar panels are able to meet energy demand on some days, gas power plants are still running in California, providing about 10% of the state’s electricity. Furthermore, according to the US Energy Information Administration (EIA), in 2021, a record-breaking year for renewables in California, the state was still the seventh-largest producer of crude oil as well as the largest and second-largest consumer of jet fuel and motor gasoline respectively in the country.