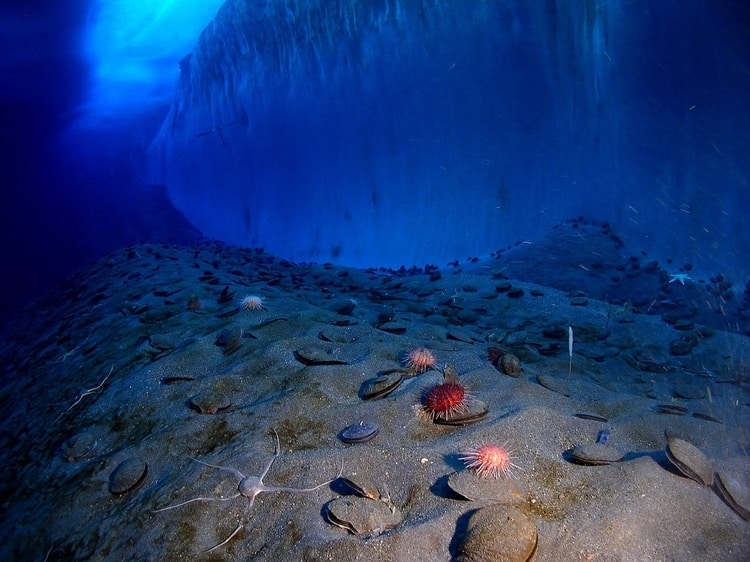 The first active leak of methane from the sea floor in Antarctica has been discovered by scientists. Worryingly, the scientists also found that the microbes that normally consume the gas before it reaches the atmosphere had only congregated in small numbers after five years, allowing the methane to escape. What does this mean for the planet in its mission to mitigate the climate crisis?

The research, published in the journal Proceedings of the Royal Society B, reports the discovery of the methane seep at a site called Cinder Cones in McMurdo Sound. The site is 10 metres deep with a 70 metre long patch of white microbial mats. This seep was first spotted by divers in 2011 and scientists returned to the site in 2016 to study it in detail, before beginning laboratory work.

The researchers are unsure of the reason for the emergence of this new seep, but believe that it is ‘probably not global heating’ as the Ross Sea where it was found has yet to warm significantly. They are most concerned, however, about the delay of the microbes in consuming the methane, which current climate models do not take into account. Andrew Thurber, from Oregon State University, who led the research, says, “The delay in methane consumption is the most important finding. It is not good news. It took more than five years for the microbes to begin to show up and even then there was still methane rapidly escaping from the sea floor.”

However, Thurber says that while very little is known about the Antarctic methane cycle, the new seep provides a natural laboratory for further research.

The source of the methane, which was found to be dissolved in the water instead of bubbling, is probably decaying algae deposits buried under sediments and is likely to be thousands of years old. The slow growth of microbes at the site means that methane is certainly leaking into the atmosphere. Thurber believes that it may be ‘five to 10 years’ before a community of microbes becomes fully adapted and starts consuming methane.

Antarctica is known as the ‘black hole’ of research in understanding the Earth’s methane cycle, as it is generally a difficult place to work, according to scientists. Vast amounts of methane are thought to be stored under the sea floor around Antarctica which is released from frozen underwater stores or permafrost regions. This process is one of the key tipping points of the climate crisis as methane is a greenhouse gas that is far more potent than carbon and could have catastrophic impacts on the planet and the environment.

The team says that this discovery may not be an anomaly, and they wonder if these features are more common than we think around Antarctica, but are rarely stumbled upon.

A recent study found that the South Pole has warmed at a rate three times the global average over the past 30 years, prompting fears that methane could be released in larger quantities as the oceans in the region warms.

The continent also experienced unprecedented heat last summer and in February, recorded a temperature of 20.75°C, Antarctica’s highest temperature in recorded history. This has exacerbated the rapid melting of the Thwaites Glacier, an unusually large and vast ice sheet in Antarctica that is nicknamed the “Doomsday Glacier” for the devastating consequences it could have on global sea level rise.

While this methane discovery may be a natural phenomenon and not necessarily caused by human activity, the effects of it will surely be worse than if humanity mitigated its greenhouse gas emissions. As natural feedback loops are initiated, this has never been more important.