The Detrimental Impacts of Plastic Pollution on Animals

In just over 70 years, our dependence on the albeit efficient and cheap material that is plastic has skyrocketed to unsustainable levels. Yet as the global production and consumption of this material continues to soar, we are not disposing and recycling plastics at the same rate. Global plastic pollution jumped from two million tonnes in 1950 to 348 million tonnes in 2017, and is projected to double by 2040. What’s left behind is incredibly harmful to all wildlife animals and to humans. Here’s how plastic pollution impacts animals.

About 11 million tonnes of land-based plastic waste make its way into the ocean each year, but this dumbfounding statistic is currently set to triple in less than 20 years. Plastic pollution creates adverse problems for wildlife in the ocean, from the 800+ marine and coastal species impacted through entanglement and other dangers to thousands more accidentally ingesting plastic, mistaking it for food. Indeed, a study has found that 1,557 species worldwide, including many endangered ones, have ingested plastic. In 2019, a turtle hatchling, no bigger than the palm of a hand, was found dead with 104 pieces of plastic in its stomach.

Plastic ingestion can bloc digestive tracts or pierced internal organs in wildlife. It can also choke and starve animals by thinking they’re full from eating plastic. In some cases, plastic consumption can lead to the reduction in stomach storage volume, making it all the more difficult for animals to eat.

Plastic debris does not decompose but breaks down into tiny plastic particles that are less than five millimetres long known as microplastic. Considering its miniature size, microplastics can therefore pass through animals’ digestive systems and expelled without consequence. Yet scientists have found plastic fragments in literally hundreds of species, including 86% of all sea turtle species, 44% of all seabird species, and 43% of all marine mammal species.

So far, a number of tests have confirmed the presence of microplastics could cause liver and cell damage as well as disruptions to reproductive systems. For some species, such as oysters, this could mean they could produce fewer eggs, threatening population growth.  New research also shows that larval fish are eating nanofibers literally within days of hatching.

According to the United Nations, more than 51 trillion microplastic particles have already littered the world’s seas, and it is predicted that 99% of marine species will consume microplastic by 2050 if nothing is done to slow down plastic pollution. 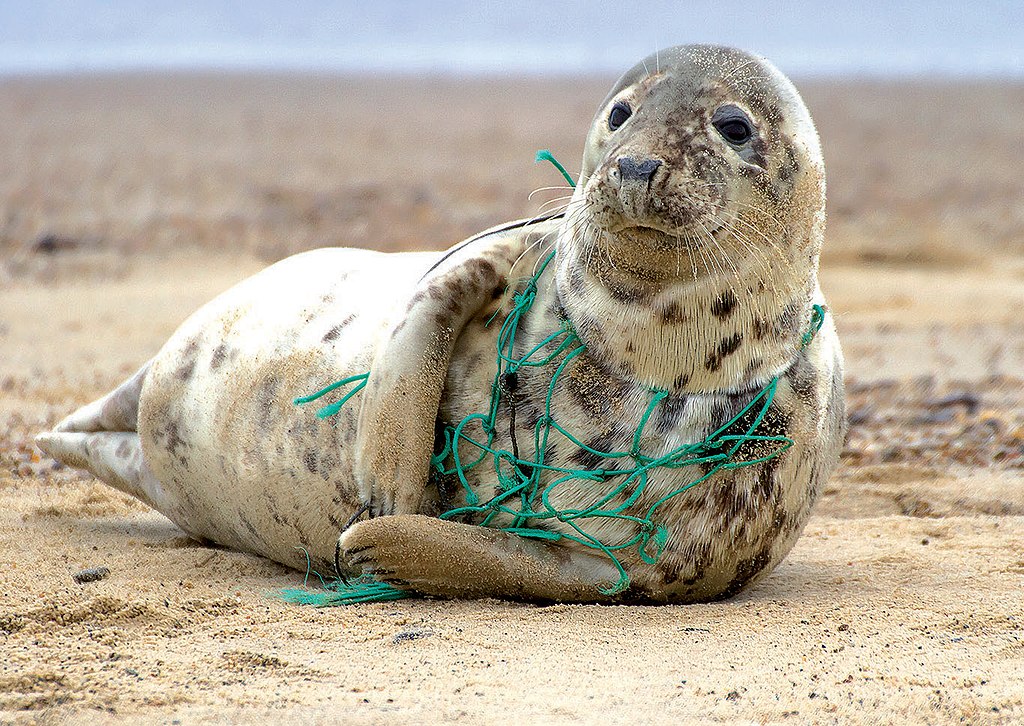 Much like the case with marine wildlife, plastic pollution and discarded waste can cause intestinal blockages and damage when land animals ingest them, and fatal in many instances. There have been many reported cases of land-based mammals, including elephants, hyenas, zebras, tigers, camels, and cattle, to have accidentally consumed plastic waste, resulting in a number of unnecessarily deaths.

For example in January 2018, a 20-year-old wild elephant in Periyar, India perished from plastic ingestion from waste discarded by the tens of millions of Sabarimala pilgrims who trek through the heavily wooded forest to reach the shrine every winter. It was later revealed that significant amounts of plastic have blocked up the elephant’s intestines, causing internal bleeding and organ failure.

Wildlife can easily get trapped and entangled in plastics, preventing them from being mobile to hunt for food or become more vulnerable to nearby prey. If they accidentally get their head stuck in plastic food containers, animals will suffer from overheating, suffocation, dehydration, starvation, and eventual death.

Plastic can also badly wound an animal, sometimes even resulting in loss of limbs. Species like racoons often get stuck in plastic ring beverage holders, which causes deep cuts and slices on their bodies, according to the Humane Society of the United States. For birds, plastics impede their ability to fly and hunt.

Microplastic is a major concern to terrestrial animals as well. Microplastics leeches into soil and nearby water sources from plastic waste in landfills and other environments. In a 2020 study, which is the first-of-its-kind to explore how the presence of microplastics can affect soil fauna, revealed terrestrial microplastic pollution has led to the decrease of species that live below the surface, such as mites, larvae and other tiny creatures. The decline of these species leads to less fertile soil and land. What’s more, chlorinated plastic – such as plastic food packaging, plastic tubings and medical devices and products – can release harmful chemicals into the surrounding soil, seeping into groundwater that many species rely upon.

The food that we grow and wildlife consumes ares therefore likely to be contaminated with microplastics. According to Greenpeace, fruit like apples and pears have an average of 195,500 and 189,500 particles per gram respectively, whereas vegetables like broccoli and carrots average more than 100,000 plastic fragments per gram.

Over three billion people around the world rely on fish as their primary source of protein. Considering that most fish species will ingest microplastics during their lifespan, plastic particles can easily travel across the food web, ultimately ending up in the human digestive system when we consume seafood. But these harmful and toxic plastic particles do not remain there, and studies have shown that it in fact, can travel throughout the human body.

A study discovered the presence of microplastics in the human placenta, carrying with them substances that can disrupt the regular function of hormones and cause long-term effects on human health such as oxidative stress as well as chronic DNA damage and inflammation. In March 2022, microplastic was detected in human blood for the first time, and weeks later, found in human lungs as well.

Though it’s still early to tell the impacts of microplastic on human health, scientists have raised concerns of the possibility of it travelling around the body and lodging in delicate organs such as the brain, causing major damage.

The plastic humans dump into the sea will eventually come back in some shape or form. To deal with our ongoing plastic epidemic, a good first step is to ban the production and consumption of single-use plastics. As of 2021, 77 countries around the globe have passed some sort of full or partial ban on plastic bags, according to the UN.

At the same time, the world needs to invest and install greater recycling infrastructure, as well as adopt economic incentives such as a Deposit Refund Scheme (DRS). In Germany, the introduction of a DRS saw a staggering 98.4% return rate of plastics, effectively reducing the risk of plastic leaching into the environment.

On the individual level, simple switches in the lifestyle habits can make a difference, from reusable bottles to eliminating clothing with acrylic, nylon, spandex, and polyester – microplastics from it shed during washes and discharged to the open environment.

The world’s biodiversity is already significantly at risk from habitat loss – due to land clearing for agriculture and other industry purposes – and climate change. We need not add another threat and pressure to the already vulnerable species around the world.