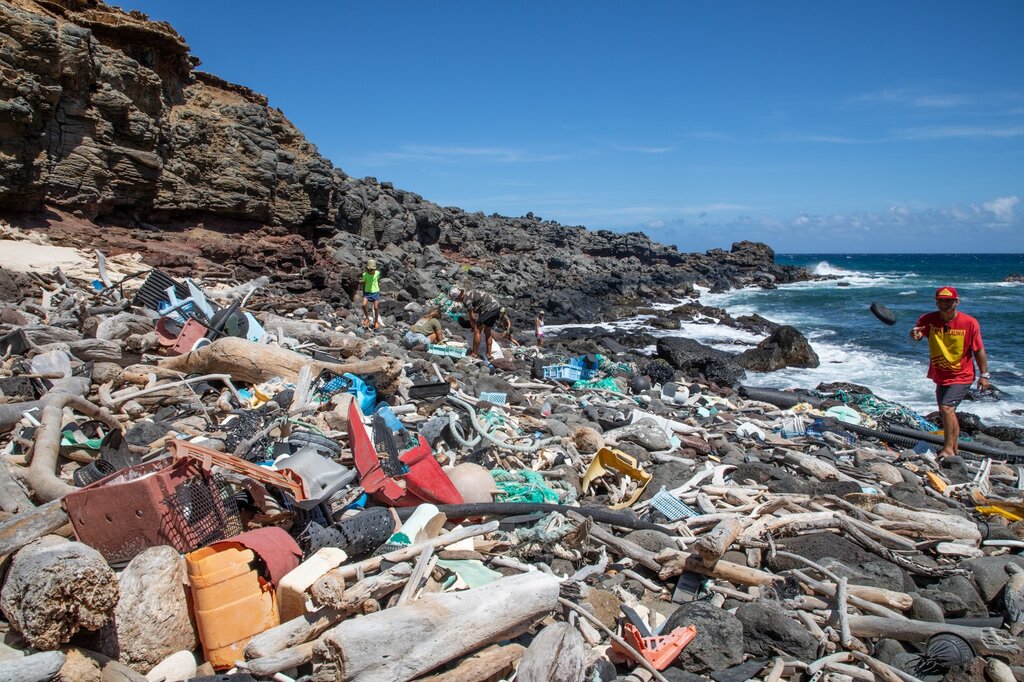 The islands’ approximation to the Great Pacific Garbage Patch and plastic consumption in the tourism industry have caused plastic pollution in Hawaii to skyrocket, covering its once-pristine beaches in plastic trash. We take a look at the environmental impacts of the plastic accumulation as well as the solutions in tackling this growing problem.

From sandy white beaches and clear blue waters to palm trees in the breeze, the tropical islands of Hawaii have long held the reputation of a paradise. It is home to a rich biodiversity including the endangered Hawaiian monk seal, the green turtle, millions of seabirds, as well a stunning variety of flora and fauna. But due to global rampant plastic pollution, the islands’ once pristine shores are now plagued by plastic waste and debris, threatening its natural ecosystem and wildlife.

According to the Hawaii Wildlife Fund (HWF), an estimated 15-20 tons of marine trash are being washed up on the shores of Hawaii every year, 96% of which is made from plastic material. In a separate report, the Kokua Hawaii Foundation also found that 70% of all ocean plastic waste derives from land sources. But where does it all come from?

Causes of Plastic Pollution in Hawaii

Global plastic consumption has reached unsustainable levels. Today, we generate about 300 million tonnes of plastic waste annually, and up to 11 million tons of it ends up in our oceans. But plastic pollution in Hawaii is particularly atrocious due to the islands’ location within the North Pacific Gyre, specifically, its proximity to the Great Garbage Patch, also known as the Great Pacific Garbage Patch.

The Patch refers to a massive collection of marine plastic debris located in the North Pacific Ocean, which is estimated to be a staggering 1.6 million sq km in size, accumulating about three million tonnes of plastic. It is formed by rotating ocean currents known as gyres, akin to giant whirlpools, with plastic waste circulating into the centre of a gyre spread across the surface of the ocean waters.

As a result, plastic debris from all over the world can be found washing ashore in Hawaii, with some estimates in 2010 placing an average of 484 plastic pieces accumulating in one locality. Much of plastic waste can be dated back from decades ago.

One of the hardest hit spots is Kamilo Beach, located on the south-eastern tip of Hawaii’s Big Island, which has since been dubbed as one of most plastic-polluted places on Earth. Recent ocean cleanup efforts saw more than 47 tons of plastic waste removed from Hawaii’s shorelines over the course of just 24 days. Some plastics were directly cut off of animals including a four-year-old female Hawaiian monk seal, with net wrapped tightly around the neck. According to the project volunteers, this was a common sight. 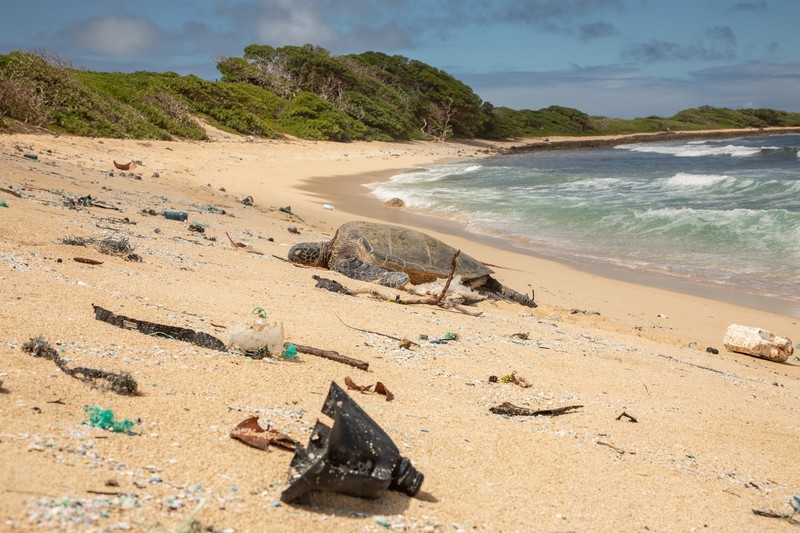 The Impacts of Ocean Plastic Pollution

Contrary to what most people believe, ocean plastic pollution does not simply come from plastic bottles and bags, but is largely made up of discarded commercial fishing nets. These nets account for at least 46% of the Great Garbage Patch. Their presence in the oceans can be lethal to marine wildlife with nearly 100,000 animals dying from entanglement each year. Often referred to as “ghost nets”, these abandoned fishing litter traps marine animals and prevent them from feeding or swimming. Wildlife can get strangulated if the nets get entangled around their necks. Many also suffer physical trauma and infections from the plastic cutting into their flesh.

A great number of vulnerable wildlife species are being driven closer to endangerment and extinction due to increasing plastic pollution and debris in the ocean, including the aforementioned Hawaiian monk seal – population estimated about 1,400 individuals – and the hawksbill turtle, where fewer than 200 nesting females have been spotted in Hawaii in the last 30 years.

What’s more, marine animals often mistake plastic debris for food and accidentally ingest them. Plastics fill up their stomachs and prevent them from eating, causing many to die from starvation. When wildlife consumes plastics, toxic contaminants accumulate in the food web over time, eventually reaching humans.

Fishermen in Hawaii routinely catch fish filled with plastics, with a 2019 study finding that fish in Hawaiian waters consume plastic particles just days after being born. As reef fish make up a large portion of the local diet, including their widely popular raw fish dishes like poke, natives have unwittingly increasingly consumed plastic. While there’s yet to be evidence directing showing the impacts of plastic consumption on human health, some early studies suggest adverse effects on prenatal developments and reproductive systems.

How is Hawaii Tackling Plastic Pollution?

It is undeniable there is an urgent need to address the unbridled plastic pollution in Hawaii, and prevent further damage to both natural and human systems.

The first thing policymakers decided to tackle is single-use plastics. In 2015, the islands became the first state in the US to ban plastic bags at grocery stores. Honolulu, the state’s capital, took it further in late 2019 by introducing one of the most restrictive plastic bans in the US and prohibited all single-use plastic food containers. This includes straws, utensils, and polystyrene. Though the COVID-19 pandemic led to an increase of single-use containers due to early fears of surface contamination.

With Hawaii being one of the most visited and popular vacation destinations in the world, tourism brings with it significant amounts of plastic consumption and waste; about 300,000 pieces of single-use plastic are used in a standard 200-room four-star hotel every month. To mitigate this, lawmakers are planning a bill to ban single-use plastic bottles in hotels, requiring businesses to provide toiletries in bulk dispensers instead. Luxury hotel chain giants like Marriott and Hyatt have already pledged to phase out plastic bottles by the end of 2022 latest.

However, many gaps in plastic-related policies remain. Following China’s announcement of a plastic import ban – where previously many major industrialised countries send their waste to be recycled in China, Hawaii is no longer able to accept plastic recycling. Instead, the state has been redirecting plastics towards landfills, where toxic substances can leach into soil and water sources, as well as incinerating them as with the case in Oahu where trash are being burned to generate electricity. While the waste-to-energy facility does help reduce waste going to landfills, the practice of burning plastic waste increases a number of health risks including heart and respiratory diseases, not to mention black carbon (or soot) released from it contributes to climate change and air pollution.

In March 2020, the US Environmental Protection Agency (EPA) also ordered Hawaii’s Department of Health to take “corrective actions under the Clean Water Act” to evaluate whether plastic is polluting the state’s water after state officials failed to do so in 2018. Under the Act, the US agency can designate any “impaired” water bodies that fail to meet state water-quality standards, forcing officials to take concrete action to reduce the pollution.