Mercury with that? Shark Fins Served With Illegal Doses of Heavy Metals 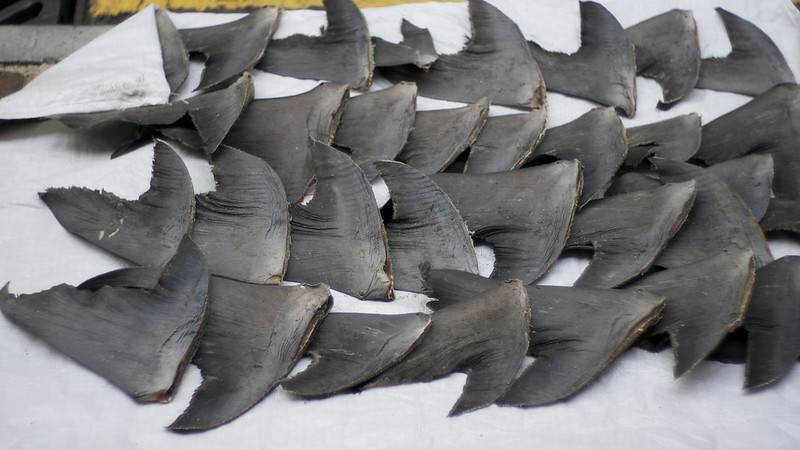 Shark fin soup is said to be the food of emperors, but a new study finds this “luxury” dish may not be so favorable to the person who eats it. A team of international researchers discovered that shark fin soup contains high levels of mercury and other heavy metals- in most cases, much higher than what’s legally considered safe for human consumption.

Shark fin soup has a long history in Chinese culture. Emperor Taizu of the Northern Song, who ruled China between 960 and 976, apparently ate shark fin soup to display his power and wealth. From that point on, the dish became a status symbol and much-sought-after food item in China, served throughout the Song dynasty (960-1279), the Ming Dynasty (1368-1644), and the Qing Dynasty (1644-1912). While it briefly disappeared from the menu when the Chinese Communist Party assumed power in 1949, it reemerged in the 1980s as a dish to signify prosperity and good fortune.

Even today, shark fin soup continues to be a popular food choice in China and Hong Kong, and there’s even a growing demand in other Asian countries like Thailand, Vietnam and Indonesia. In Hong Kong, it’s frequently served as a delicacy at weddings and New Year’s banquets, but you can also find “everyday” versions of the soup at most restaurants.

To feed the insatiable demand for shark fin soup, about 100 million sharks are killed every year, according to one study. While it’s legal to trade the fins of many shark species, other sharks are protected under CITES Appendix II, which only allows trade when special permits have been granted. But CITES regulations have not managed to stop the many illegal parts of the global shark fin trade. 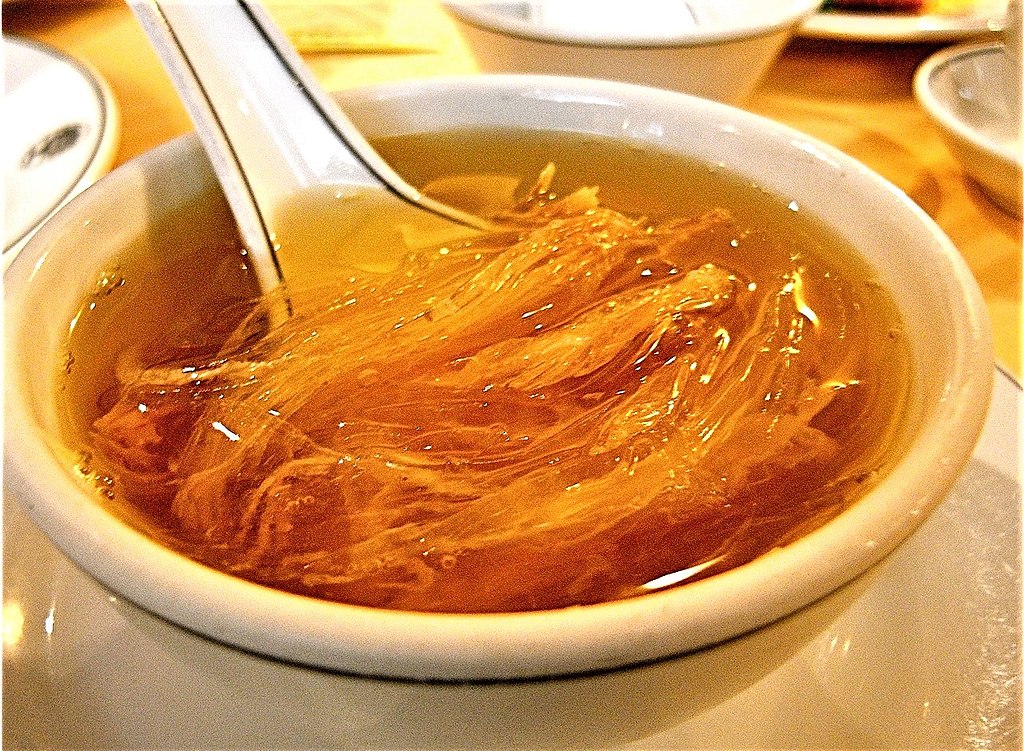 “The processing sharks fins undergo to be ready to be used in shark fin soup is very secretive and involves different chemicals that might affect mercury concentrations,” Laura García Barcia, a doctoral candidate at Florida International University and the study’s lead author, told Mongabay. “We wanted to assess the mercury present in the final product that goes straight to the consumer. Only one study before us had looked at mercury in processed shark fins but unfortunately, they did not have the resources to analyze the fins at the species level. Ours is the first study on processed shark fins that gives information on mercury levels by species.”

The team took 267 samples of shark fin trimmings — pieces of cartilage, muscle and skin cut off from the main part of a shark’s fin — from nine of the most common shark species that end up in soup bowls, which they distinguished through DNA testing. These included blue sharks (Prionace glauca), silky sharks (Carcharhinus falciformis), scalloped hammerheads (Sphyrna lewini), smooth hammerheads (Sphyrna zygaena), bull sharks (Carcharhinus leucas), shortfin mako sharks (Isurus oxyrinchus), great hammerheads (Sphyrna mokarran), oceanic whitetips (Carcharhinus longimanus), and several species of blacktip sharks, which they grouped together in what they called the “blacktip complex.” Using nitric acid and a spectrometer, they tested the fin trimmings for mercury and methyl-mercury, an organic, highly toxic form of mercury.

Most shark fins turned out to have five to 10 times more mercury the legal maximum amount of 0.5 parts per million, as indicated by the Hong Kong government’s Centre for Food Safety (CFS), which is similar to the Food and Drug Administration (FDA) in the United States. The highest amount was found in great hammerheads, which had mercury levels of 55.52 parts per million.

“Hammerheads are very large sharks and they are also at the top of the trophic chain,” García Barcia said. “They are sharks that can eat very large prey, and the larger prey you eat, the higher the mercury is. If we had actually looked at great white shark fins, you would have probably seen very high mercury levels also, but for us, the highest predator in our study was the great hammerhead.”

In Hong Kong, great hammerhead fins are considered to be premium products, and sold at prices equivalent to $500 to $1,000 per kilo, according to Demian Chapman, a shark researcher and one of the study’s authors.

Hammerheads “represent the most expensive and most sought after fins in the trade,” Chapman told Mongabay. “Therefore, the most expensive fins on the market also carry the highest risk of mercury toxicity. Banquet hosts often purchase these premium fins or order to honor their guests, which is ironic in light of their particular toxicity.”

Mercury enters the ocean, and into sharks’ bodies, in a variety of ways. It can come from natural sources like volcanoes, and from human activities such as gold mining, inadequate waste management, and the burning of coal, wood and oil, García Barcia said.

“Mercury in surface ocean waters has roughly tripled in the last century,” García Barcia said in an email. “Methyl-mercury biomagnifies through the food web, resulting in top predators accumulating high concentrations of this pollutant.”

“The species in our study are all large-bodied, top predators so we expected to find high amounts of mercury in the tissue samples,” she added. “Mercury concentrations depend on a long list of factors including the diet of the shark, its region of origin and the size at which it was caught.”

Right now, little is known about what mercury levels do to sharks themselves, but some studies show negative impacts of mercury on certain fish species.

“Fish can have problems with swimming performance, it affects their reproduction, the survival of the offspring is greatly reduced,” García Barcia told Mongabay. “But for now, we actually don’t know what the effects are in sharks. We think they are very similar [to other fish species], but sharks have been around for 400 million years, so maybe they just have a way to excrete it.”

While a single bowl of shark fin soup probably wouldn’t seriously affect your health, García Barcia said that prolonged consumption of shark fin soup, and other mercury-rich foods like tuna and swordfish, could lead to brain damage and changes in the central nervous system. If pregnant women consume too much mercury, their babies are more at risk of neurocognitive deficits and neuromotor disabilities.

The Hong Kong CFS website carries information about mercury in shark products, but it’s limited. For instance, there’s a warning that a shark’s tail skin contains mercury levels of 4.16 parts per million, but another page says that “mercury levels in all shark fin samples tested by the Centre for Food Safety were satisfactory” and not above the legal levels.

Gary Stokes, director of operations at Oceans Asia, a Hong Kong-based NGO, has been investigating the shark trade for 20 years, and he said that most consumers don’t realize the health risks attached to shark fins.

“The average person has no idea of the high mercury levels in shark fins,” Stokes told Mongabay. “In fact, very few have any idea of where the dish in front of them came from at all. The barbaric slaughter, the illegal vessel it was likely caught by, most crewed by slaves. Many don’t even connect that it came from an actual shark.”

Besides being high in heavy metals, shark fins tend to be processed with peroxide or bleach, Stokes said. Then they’re laid out to dry on dirty streets, sidewalks, back alleys and rooftops.

“Shark fin traders are laughing and making fools of those who dine on this ‘luxury dish,’” Stokes said. “They know the filthy path these fins have taken to the final ‘fancy bowl of soup.’ In a germaphobic Hong Kong, it baffles me how clueless some people can be. They walk past these fins in the gutter, covered in flies and bacteria, then enter a restaurant and pay US$100 a bowl because they saw a beautiful picture of a golden bowl of shark fin soup.”

The team recently sent the results from the study to Hong Kong’s CFS, although they’re still waiting on a response.

García Barcia also said the team is working with NGOs in Hong Kong to help spread the word about mercury levels in shark fins.

“Previous campaigns … have focused on the importance of sharks in the ecosystems or how shark populations are declining worldwide,” García Barcia said. “That’s a message that has resonated within younger audiences in Hong Kong, but not necessarily with older people that actually have the purchasing power to drive the demand for shark fin soup. So we think that a health-based approach could actually help resonate with people that … care about their own personal health, and we hope that helps further reduce the demand.”