What is Ozone Pollution and How Does Nitrogen Oxide Contribute to It?

Ozone (O3) is a colourless gas that is formed naturally in the atmosphere, and is made up of three oxygen atoms bound together. Ozone gas can be used as bleach or disinfectant, and a sterilising agent for air and drinking water due to its strong oxidative property that kills microorganisms.

There are small concentrations of ozone in the Earth’s upper atmosphere, making up what we know as the ozone layer. This gaseous layer plays an important role in combating the global greenhouse effect, as it protects harmful ultraviolet (UV) radiation from reaching the planet’s surface. High concentration of UV rays can cause skin damages and cancer in humans, and it can detrimental to the health of plants. Consequently, ozone holes can be dangerous and over the past few decades, the world has actively been reducing the existing holes as well as preventing them from developing in the first time.

Ozone however, can also be formed on the ground and surface level when air pollutants, such as nitrogen oxide (NOX) released from fossil fuel-powered vehicles and coal power plants, react with oxygen and UV sunlight.

What is Ozone Pollution?

As ozone pollution sources come from fossil fuel automobiles, it is commonly found in urban city environments and densely populated areas. Smog is also more likely to occur during sunny, high-temperature conditions as well as periods of high air pressure, where air becomes stagnant and pollutants are more concentrated over certain areas.

Aside from significantly reducing visibility, ozone pollution poses great harm to human health and increases risks of respiratory illnesses such as asthma and lung cancer. There has also been some limited evidence showing that repeated, long-term exposures to smog can inhibit the growth of lung tissue in children and worsen cardiovascular diseases such as atherosclerosis.

A scientific study from 2011 estimated that 4,700 US deaths in 2005 were related to ozone pollution and poor air quality levels. The loss of approximately 36,000 years of life expectancy has also been linked to ozone exposure. In China, the world’s largest polluting country, have cost as many as 316,000 lives as a result of ozone exposure, accounting for 28% of all respiratory deaths based on a 2010 study. In the same analysis, India experienced approximately 450,000 ozone-related deaths.

Ozone pollution can severely impact both flora and fauna growth, inhibiting plants’ ability to photosynthesise and reduce gas exchange. All these factors lead to reduced growth in natural vegetation and crops, as well as inducing early ageing. Should smog continue to worsen and become more widespread, it could add further stress in plants, limiting their ozone absorption ability, which in turn, increases ozone concentration in the atmosphere. 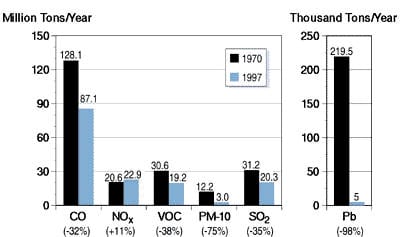 Changes in air-pollution emissions in the United States. Photo courtesy the US EPA.

Regulation in the auto industry is critical in reducing vehicle emissions, which lowers ozone pollution in densely-populated urban cities. In the US, through heavy regulation and improved engine technology, the sector was able to slash pollutants from car emissions by more than 99% within a few decades. Nationally, thanks to the Clean Air Act and its 1990 amendments implementing ambient air quality standards for six common air pollutants including ozone, saw a 31% decrease in the average ozone concentration from 1980 to 2016.

Other countries however, have not been as successful, and in fact, have been experiencing worsened ozone pollution. China, especially areas including the Beijing-Tianjin-Hebei region, suffer from heavy ozone pollution between June and November as temperatures soar during these periods. While the Chinese government announced plans to control VOC emissions between the months of June and September to help reduce ozone pollution, the air pollution problem will continue to persist unless the country overhauls its transportation system and eliminates its large-scale domestic coal production.