Permafrost is a ground layer under the Earth’s surface that has been frozen for a minimum of two years and as many as hundreds of thousands of years. However, warming temperatures under climate change is causing this permafrost to melt. Unfortunately, this is leading to an acceleration of climate change as the thawing soil releases greenhouse gases (GHGs), particularly methane, a gas with more potency than carbon dioxide.

Permafrost is predominantly found in the northern hemisphere, constituting 25% of the ground type found there. Key areas for permafrost are the Arctic regions of Siberia, Canada, Greenland and Alaska. In the southern hemisphere, there is far less permafrost extent, however, some is found in the mountainous areas of the Andes, New Zealand’s Southern Alps and Antarctica. 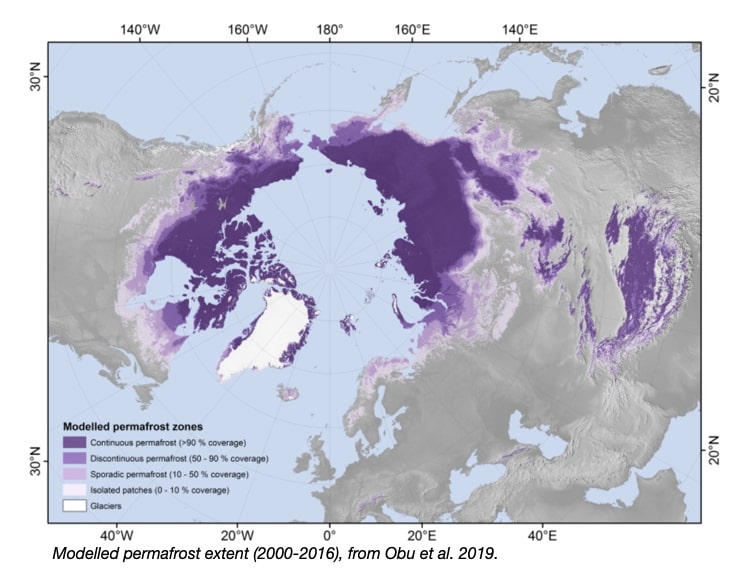 As global temperatures rise due to global warming, there are a range of temperature predictions for future global average temperature increase depending on our emission pathway scenarios. However, as this is a global average, it doesn’t accurately represent how some areas will warm more than others. The Arctic is predicted to warm more drastically than any other area on the planet. This is evidenced not only by climate models predicting the future, but by observations over the last 30 years: the Arctic has warmed at roughly twice the rate of the rest of the globe, in a process known as Arctic amplification. This phenomena is caused by the retreat of sea ice as open water reflects less incoming radiation than the white sea ice, and by atmospheric heat transport from the equator.

While this phenomena presents a myriad of environmental issues, such as sea ice retreat and sea level rise, increasing temperatures are also resulting in a rapid thawing of permafrost. Permafrost contains a high content of frozen organic material. If this material thaws, it will begin to decompose, which releases GHGs, such as carbon dioxide and methane. Permafrost is one of the planet’s carbon sinks, storing around 1 400 Gt of carbon dioxide. Since 2018 humans have been pumping about 30-35Gt of carbon dioxide into the atmosphere per year, (down from 36.15Gt in 2017), and the planet is experiencing unprecedented warming. It is predicted that 3°C of warming by the end of the century will put about 280Gt of carbon dioxide and 3Gt of methane into the atmosphere from melting permafrost, with the warming effect of methane being 10-20 times greater than carbon dioxide. The additional GHGs in the atmosphere are accelerating climate change and the warming of the planet, which accelerates permafrost thaw further. This is known as a positive feedback mechanism. 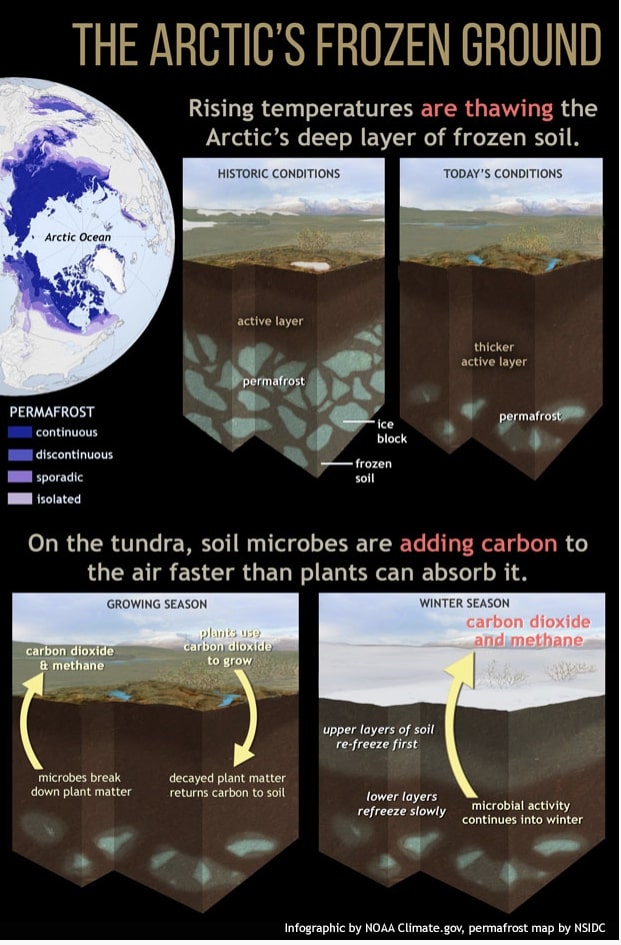 Infographic from NOAA Climate.gov and permafrost map by National Snow and Ice Data Centre, showing how permafrost works as a positive feedback mechanism

Permafrost thaw is an international issue that is accelerating each year. However, the urgency of the issue is prompting some solutions. For example, engineering-based solutions in the form of methane capture and transformation into energy is one idea, but due to the economic and logistical challenges, it is an idea in its infancy.

However, there are some nature-based solutions that may be able to have local impact. For example, through habitat restoration. Sergey Zimov, a geophysicist and specialist in subarctic ecology, began working on Pleistocene Park, a scientific research station and nature reserve, assessing the benefits of ecosystem restoration on permafrost preservation, carbon sequestration and the albedo effect. Founded in 1996, Zimov ceded the project to his son and fellow scientist, Nikita Zimov, who focuses more on climate change prevention than Pleistocene ecology, saying that “there is only one theoretical chance to prevent that [permafrost thaw] from happening. We must restore the Ice Age ecosystem.” The pair believe returning grazing animals, similar to those found in the Pleistocene era to replace herds of bison, musk ox, reindeer, moose and woolly mammoths, would compact the snow during winter months. In theory, the increase in grazing animals in arctic regions would increase the compaction of the thin layer of snow, increasing the layer’s density, allowing for deeper freezing of the soil underneath, essentially protecting and strengthening the permafrost layer. However, this type of project proposes a multitude of unknown risks that accompany species reintroductions and rewilding projects.

Similarly, researchers at the University of Edinburgh have investigated the novel approach of using plants to control the temperature of soils. By planting communities of trees, shrubs and mosses over permafrost layers, the plants can shade soil, lowering temperatures, and also extract water through their roots, which dries the soil allowing it to act as a better insulator. However, the research is in very early stages and requires a deeper understanding of how these different plant types interact with permafrost.

Overall, a simple way to reduce global warming is to reduce global GHG emissions in order to reduce the greenhouse effect. However, there are many political, social, economic and technological barriers that are preventing us from moving to a carbon neutral society. The challenge is not impossible and is the most feasible way to limit the loss of permafrost, and therefore, acceleration of climate change.