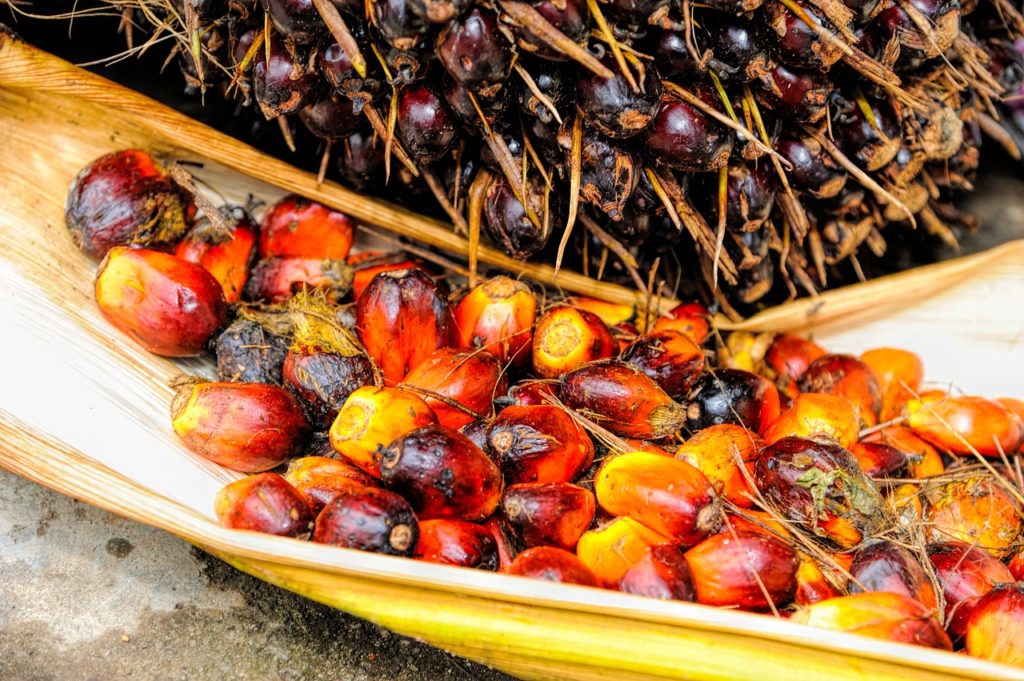 An estimated 50% of supermarket products – including make-up and hygiene products and household foods – contain palm oil. Environmentally-conscious consumers are frustrated by its seemingly inescapable presence. Where does it originate, why is palm oil deforestation an issue and what actions are being taken by governments, businesses and customers to reduce its detrimental impact?

Palm oil is famous for being a major driver of large-scale deforestation of some of the world’s largest forests, destroying the habitat of already endangered species like the Orangutan, pygmy elephant, and Sumatran rhino.

The palms from which this edible vegetable oil is obtained are native to Africa but were brought to South-East Asia just over a century ago as an ornamental tree crop. Here, they found an ideal habitat to take root in. Amongst the 42 producing countries, Indonesia and Malaysia currently make up over 85% of the global supply of palm oil.

This incredibly versatile oil has different properties and functions that make it an extremely popular product worldwide.

It is semi-solid at room temperature, which makes it easier to use it. It is also table at high temperatures, making it a great frying oil. Moreover, palm oil is resistant to oxidation and is thus added to several processed foods to ensure a longer shelf-life; it is also odourless and colourless, which means that it does not alter the look or smell of food products. In Asian and African countries, palm oil is used widely as cooking oil, just like sunflower or olive oil are widely used across European countries.

Nowadays, palm oil is in nearly everything. According to the World Wildlife Fund (WWF), nearly 50% of the packaged products we find in supermarkets – from pizza, doughnuts and chocolate, to deodorant, shampoo, toothpaste and lipstick – contain this type of oil. In many parts of the world it is also used in animal feed and as a biofuel.

Given that palm oil is in about half of supermarket products, individuals may wonder why they do not see it listed as an ingredient on their shampoo or other everyday items. Palm oil has indeed become a “dirty word” that manufacturers avoid on their packaging; and it is often not a labelling requirement. Derivatives can appear under many names, disguising their presence in everyday off-the shelf products.

Take decyl glucoside, sodium lauryl sulfate and cetearyl alcohol, for example. Nothing in the chemical terminology gives away the fact that these widely-used compounds are all byproducts of palm oil. There are around 170 different names used to disguise palm oil on packaging.

In a January 2019 report, The World Health Organisation warned that alternative names for palm oil and unclear labelling means that “consumers may be unaware of what they are eating or its safety”.

The palm oil industry is often compared to “Big Tobacco”, suggesting that it is deploying similar tactics to influence research into the health effects of its products.

“These tactics – like establishing lobbying structures in political and economic hubs, fighting regulations, attempting to undermine reliable sources of information and using poverty alleviation arguments – are similar to those pursued by the tobacco and alcohol industries” the report reads.  “However, the palm oil industry receives comparatively little scrutiny”.

The Malaysian Government has since asked the WHO to pull the report, which it described as biased. “We view the article as half-truths, un-scholarly, flawed and utterly biased against palm oil, with suspected intention of demonising the palm oil industry,” stated the Ministry of Primary Industries. 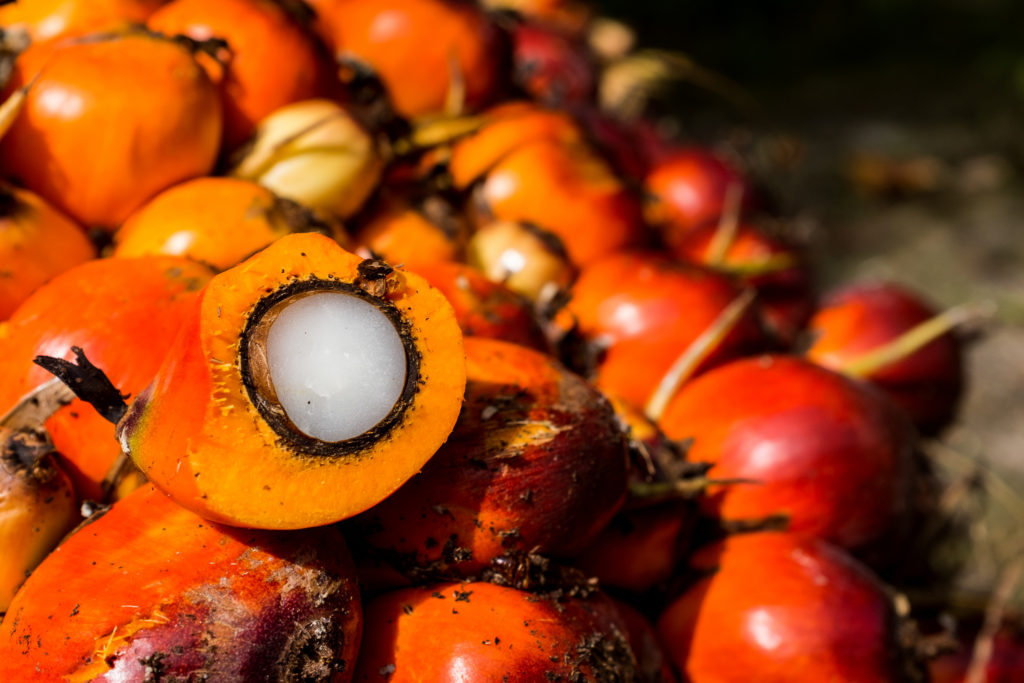 Palm fruits are the source of the world’s most popular edible oil. Photo by Nanang Sujana/CIFOR

The Issue of Palm Oil Deforestation

While the health benefits of pail oil have been disputed, one thing is certainly clear: palm oil plantations are a major driver of deforestation of some of the world’s most biodiverse ecosystems, severely degrading the environment and affecting the carbon sinks of the world that leads to catastrophic impact on forests, endangered animals and climate change

Palm tree plantations have a life-cycle of 28-30 years. After this time, the trees reach a height of over 12 metres, making them uneconomical to harvest the fruits from which the oil is derived from. They are then cut and replaced by new trees.

Palm oil deforestation is a huge issue. It is estimated that up to 300 football fields forest globally are cleared every hour to make room for palm plantations, destroying the habitat of already critically endangered species like the orangutan, Sumatran tiger and rhino.

Forest loss, because of all the carbon contained in living organisms, coupled with conversion of carbon-rich peatlands, emits millions of tonnes of greenhouse gases into the atmosphere, further contributing to climate change.

NASA researchers say that accelerated slash and burn forest clearing in Borneo contributed to the largest single-year global increase in carbon emissions in two millenniums, which transformed Indonesia into the world’s fourth-largest source of carbon emissions.

Ironically, palm oil was supposed to help save environment degradation. A decade ago, Western nations mandated the use of vegetable oil in biofuels, in an ambitious move to reduce carbon dioxide emissions and curb global warming.

Domestic pressure from rural constituencies played a role. America’s agricultural industry had been heavily lobbying to enter the energy sector to create a marketplace alternative to its natural food supply chain.

The Energy Policy Act passed in 2005 contained the first provisions for the Renewable Fuel Standards, requiring transportation fuel sold in the United States to contain a minimum volume of renewable fuel. But the legislation encouraging biofuels was drawn up based on an incomplete accounting of the true environmental costs, ignoring scientific warnings that the policies could have the opposite of their intended effect.

Biodiesel production in the US subsequently jumped from 250 million gallons to 1.5 billion gallons between 2006 and 2016. While domestic soy-bean production was diverted to meet the lucrative biofuel demand, the food industry replaced the increasingly expensive soy-based ingredients with a cheaper substitute: palm oil.

Indonesian and Malaysian palm oil flooded western markets, with a crippling effect on the tropical rainforests.

Indonesia continues its environmental rollback, even though the country is seen as crucially important to the success of the Paris accord to cut global carbon emissions.

In December 2018, the government announced plans to build more than 100 coal-fired power plants, and expand the production of palm oil for local biofuel consumption.

“They are doing some good things, but it is not enough, said Teguh Surya, who works at a local environmental NGO, referring to Indonesia’s efforts to restore carbon-rich peatlands and a suspension on partial forest clearing. “Palm oil expansion is still in planning, on the ground we found some peat areas still open for plantation and there is still weaknesses in law enforcement.”

Power to the Consumer

Fortunately for eco-conscious consumers, a quick internet research and brand selectiveness can go a long way to steer clear of products that may contribute to unsustainable practices.

A handy consumer app, Buycott allows buyers across the world to scan the barcode of a product to find out its exact content and how sustainable it is.

Consumers can also look out for Roundtable for Sustainable Palm Oil (RSPO) certified products, as well as those containing organic palm oil.

In large numbers, more environmentally aware consumers can essentially force companies to clean up their act by boycotting corporations outed for unsustainable production– as in the cases of Nestle, Ferrero and Unilever.

To encourage change in the industry and mitigate the substance’s impact on the environment, “the solution is for big brands to only buy palm oil from responsible growers that protect rainforests”, says Diana Ruiz, senior palm oil campaigner for Greenpeace. “And it is available”.